Once a “Diamond in the Rough”, now a beautiful, polished gem!  Come see the completely renovated Dania Beach Marina!  Cruising the Intracoastal Waterway and looking for a great destination to stop?  Steps from the glittering white sands of the beach, you can see the glimmering waters of the Atlantic from your slip.

Formerly known as the SeaFair Marina, this facility was originally developed as part of a dining and entertainment complex built by a private company in the early 1980’s.  Today the building complex is now SeaTech, the Institute for Ocean and Systems Engineering College of Florida Atlantic University.  The marina was completely renovated in 2014, with all new Bellingham docks, new upland features, and a new secure Marina office, Captain’s Lounge and bath house.  A large outside pavilion complete with picnic tables and barbeque grills ensures boaters have a place to enjoy a meal out of the sun with an ocean breeze.

In early 2010 Westrec was selected by the City of Dania Beach through a comprehensive RFP process for the management and operation of this municipal marina, directly on the Intracoastal Waterway, Oceanside on Dania Beach.

The Marina is adjacent to Dr. Von D. Mizell-Eula Johnson State Park.  Formerly known as John U. Lloyd Beach State Park, the Park was renamed in 2016 to honor two Civil Rights Movement leaders who led “wade-in” protests to desegregate South Florida beaches in the 1950’s and 1960’s.  John U. Lloyd was the Broward County attorney who was instrumental in transferring ownership of the land to the State of Florida to be preserved as a Park rather than be developed.  Just steps from the Dania Beach Marina, the park borders Port Everglades inlet and is lined with mangroves, flora and fauna native to Florida.

From I-95 take I-595 East.  Head southbound on US 1 / Federal Highway towards Dania Beach downtown.  Turn left on East Dania Beach Boulevard.  Cross over the Dania Beach bridge over the Intracoastal Waterway and stay in right lane to merge onto N. Beach Road (the first exit on your right after you go over the bridge).  From parking area, the Dania Beach Marina is on your left.

Back to Marinas
News 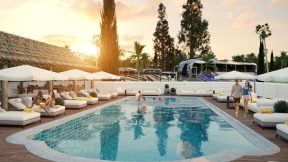